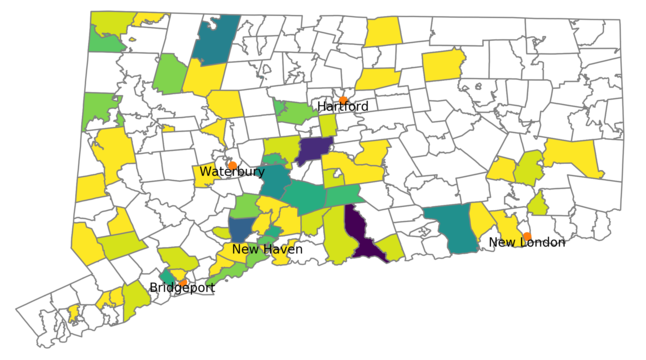 On March 24, 2018, Yale GradSWE hosted CT SEED (Connecticut Students Exploring Engineering Day), our first state-wide outreach event. The goal of our event was to bring middle school students from all over the state to Yale's campus to learn about engineering. We had almost 200 students join us for a day full of hands-on activities and exciting demonstrations! We worked through three different activities, covering a wide range of engineering concepts. Children from all over the state and beyond came to the event as you can see on the map. 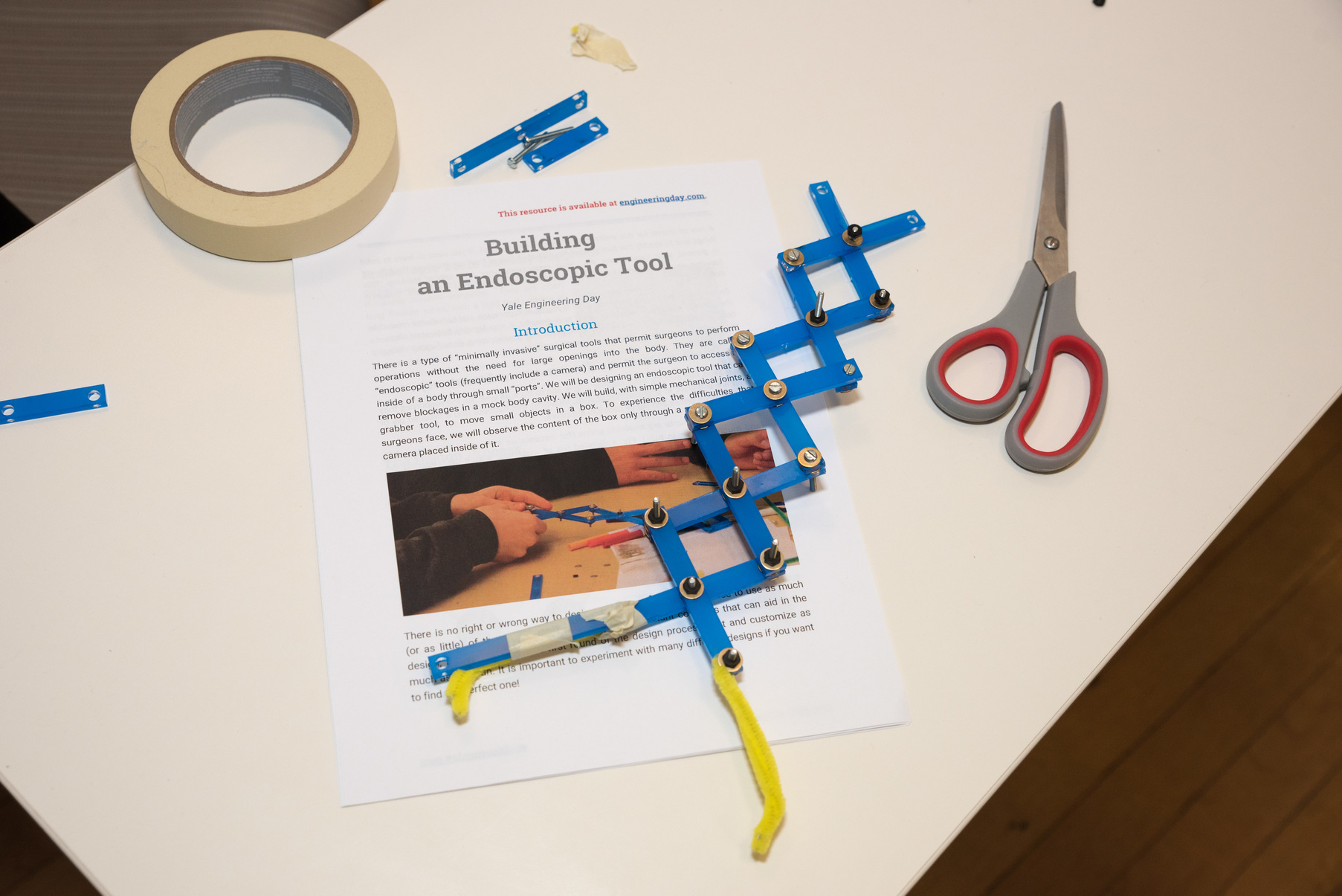 First up was a "design challenge"-style activity dealing with biomedical and mechanical engineering. Our volunteers, among whom were medical students and biomedical engineers, introduced the children to endoscopic surgery. These are non-invasive surgeries where special tools are used to reach inside the body through small incisions. The students were given various components with which to build a mock model of such a tool. Special attention was given to the importance of testing and iterating their design - the ideas behind both the Engineering Process and the Scientific Method. The students then had a chance to test their designs in a mock "body" - an empty box inside of which they had to complete some tasks. Only the newly built tool could reach inside the box and the only way to observe the inside of the box was through an endoscopic USB camera. 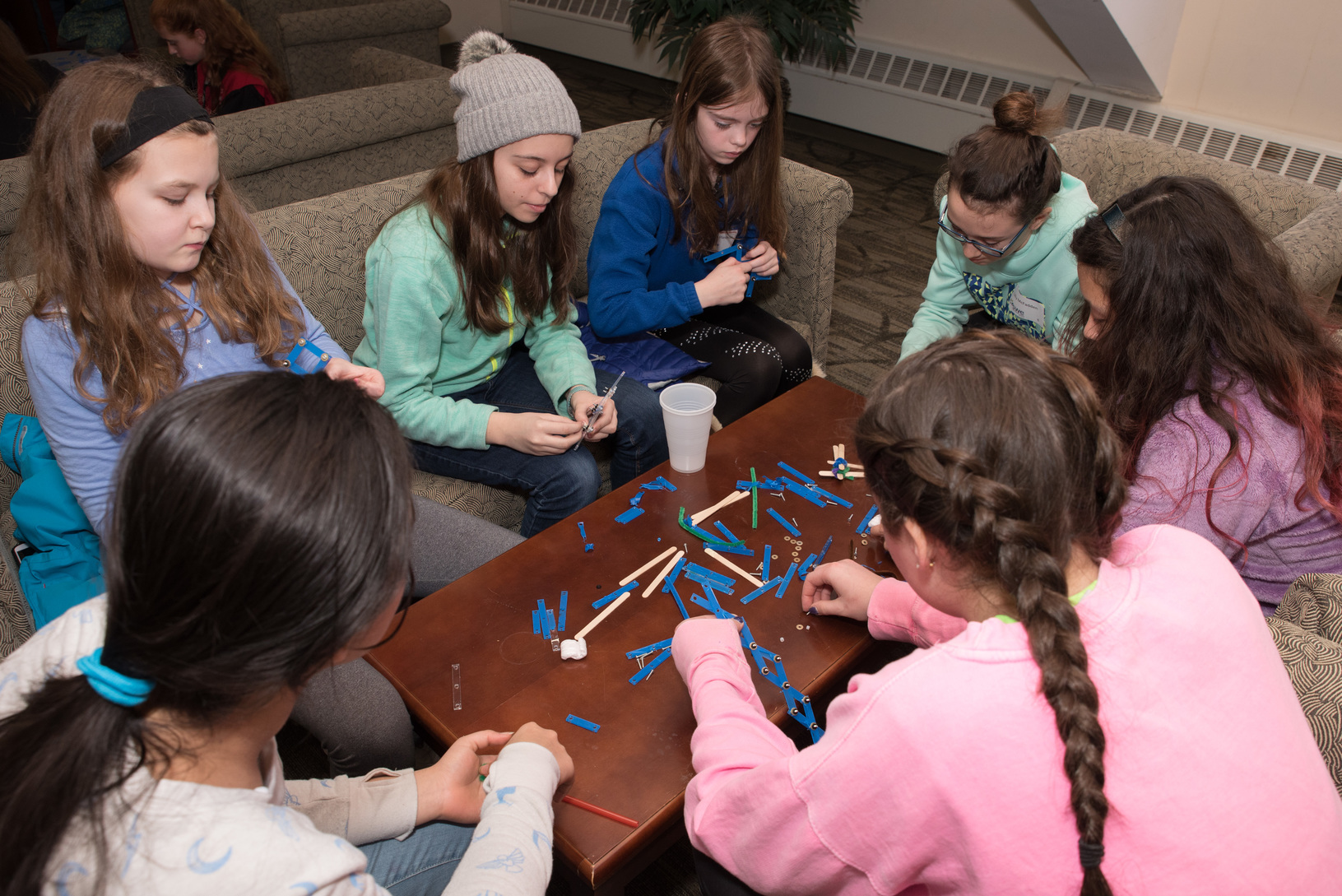 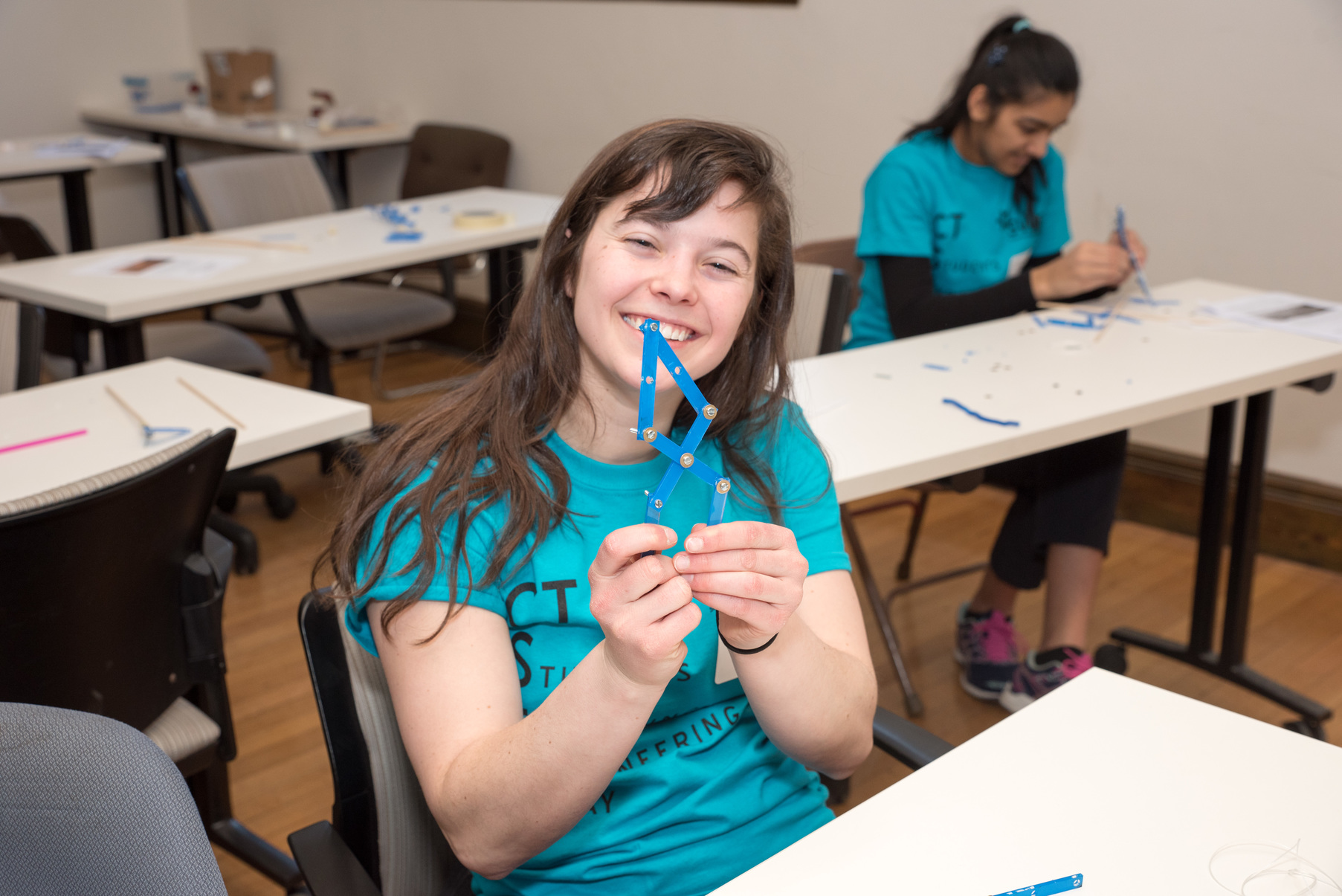 Colormixing and soldering with LEDs 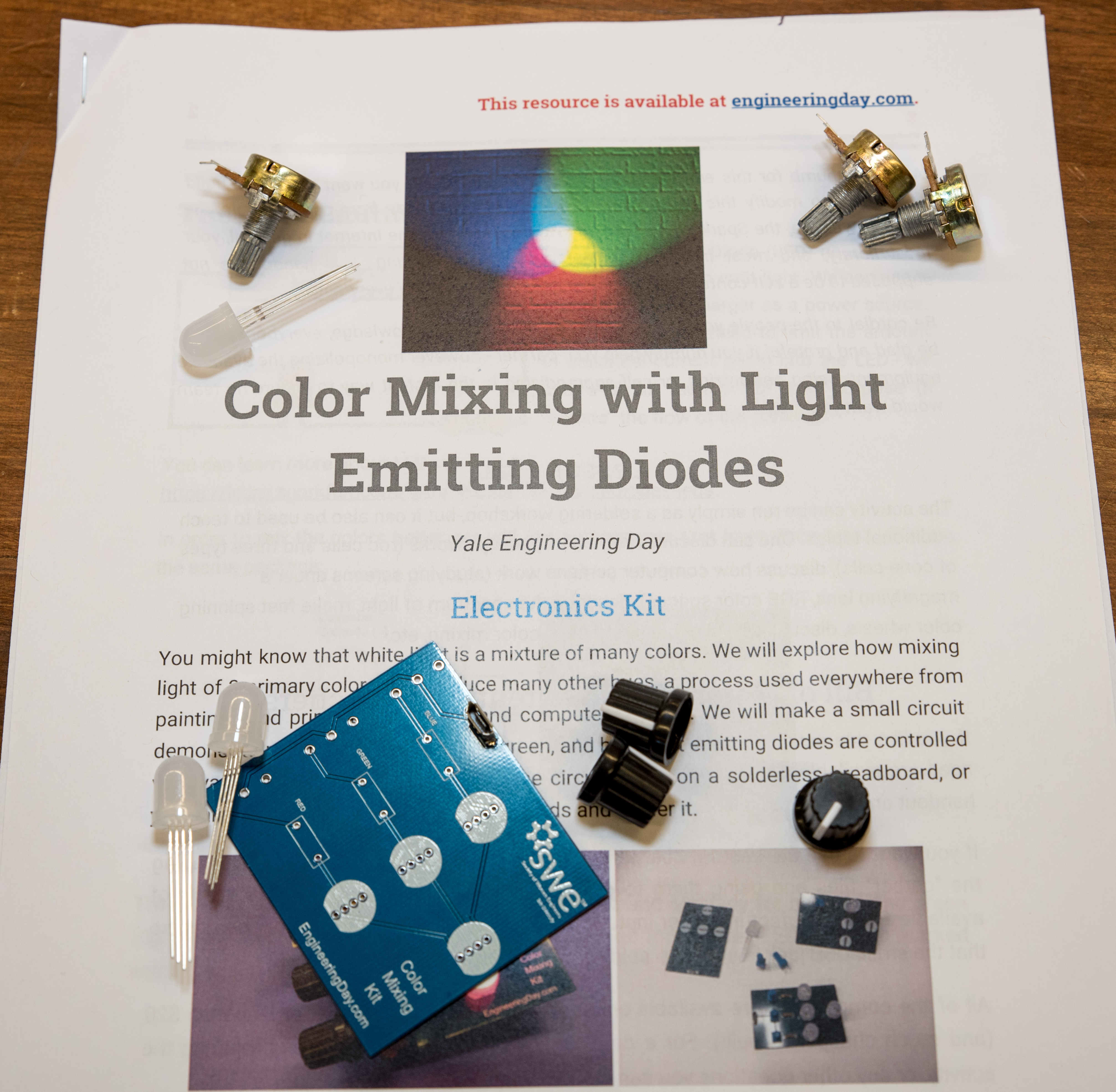 In another activity we had each of the students learn how to solder. Our main goal was to show them that these skills, typically considered advanced and "only for grownups", were very much in their reach. Each student had their own board, and single-handedly soldered each component. We were particularly pleased how attentive the students were - focused on learning the new skill - perfecting their board (that they got to take home).

The board itself contained four light emitting diodes. Each of the first three was controlled by a knob, setting the intensity of their color (red, green, or blue). The three signals were combined in the fourth LED where the three colors are mixed to show a new color. This setup permitted us to use the activity to talk about additional phenomena, like how humans perceive color, the spectrum of light, and how printers or computer screens work. 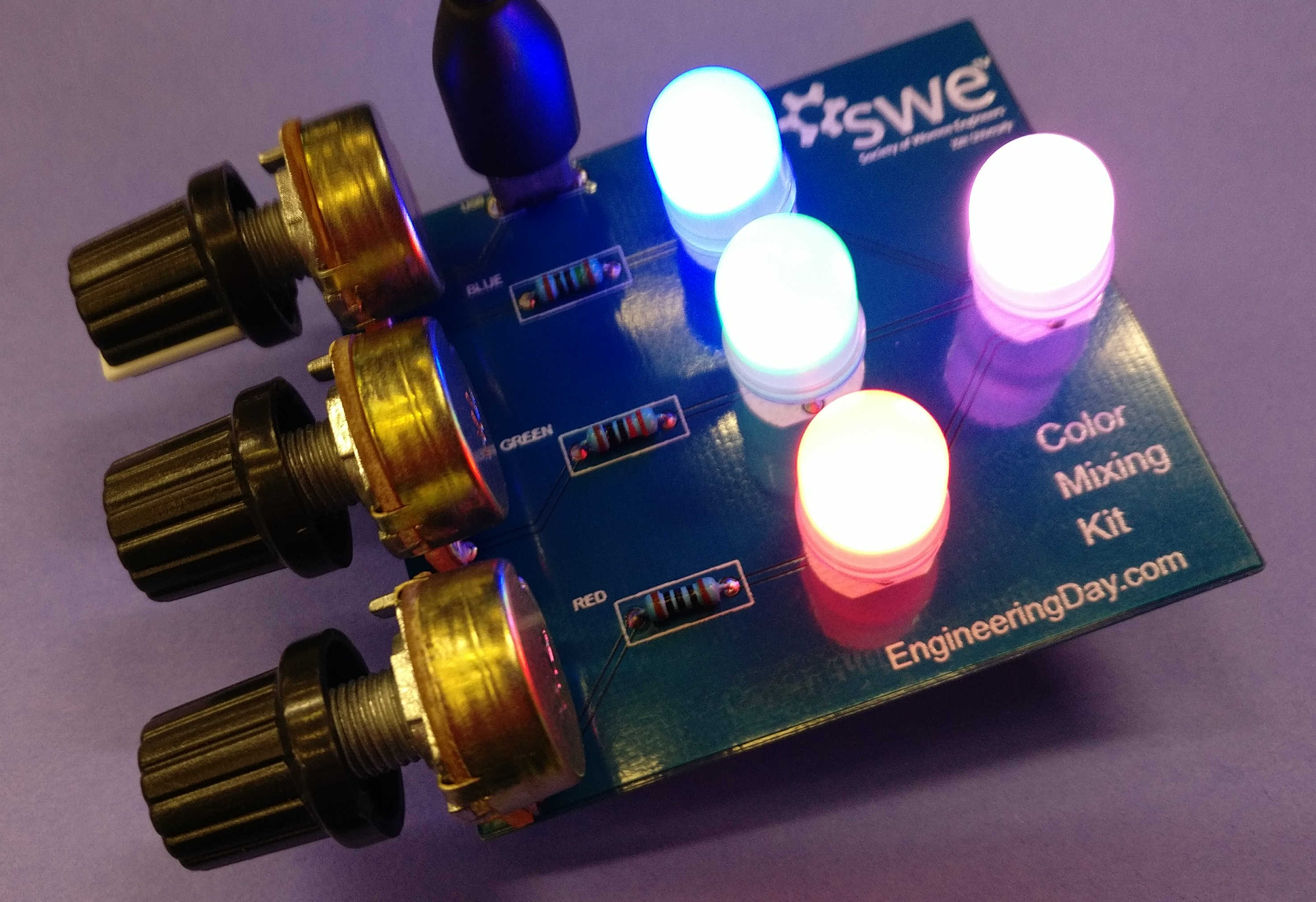 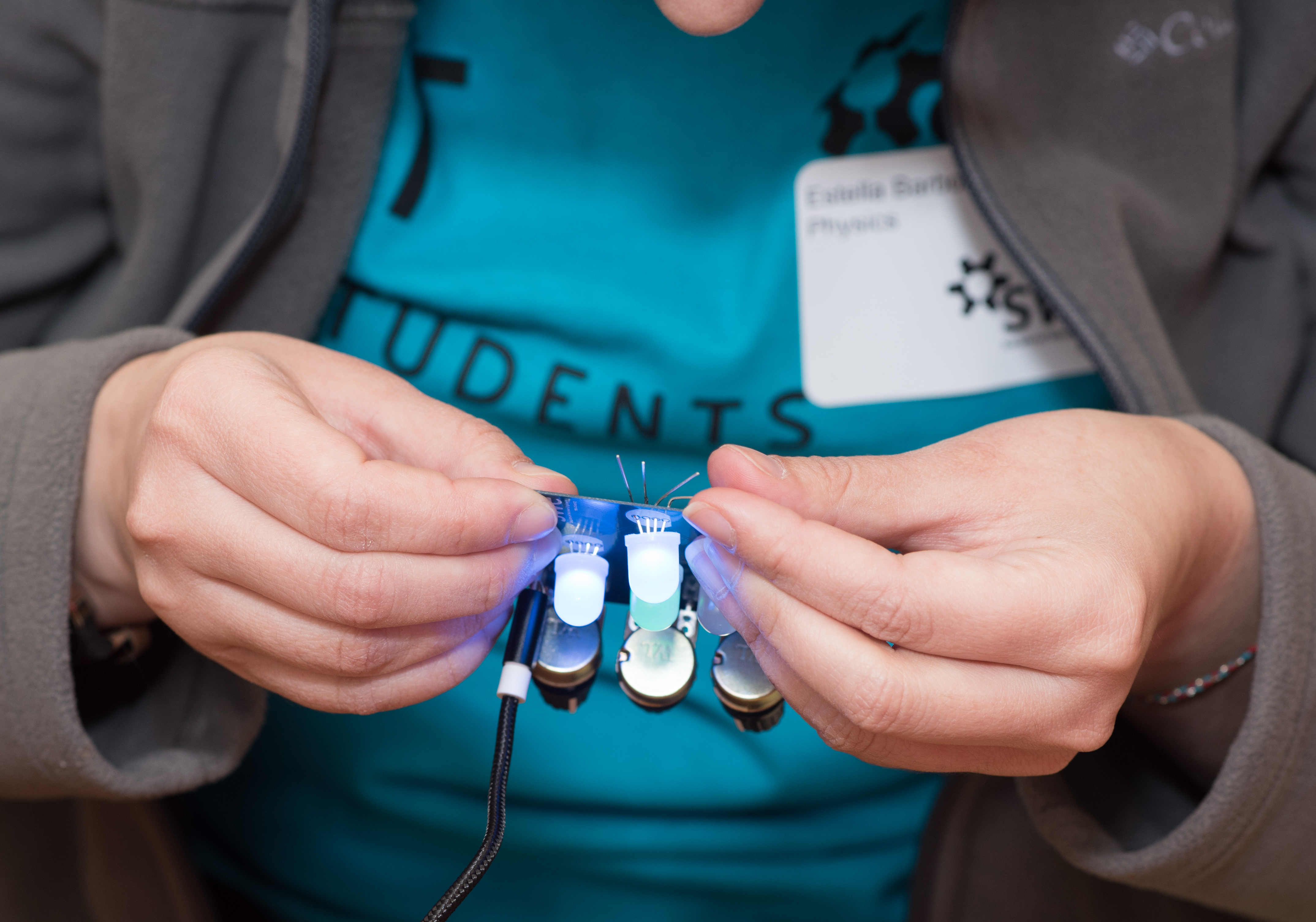 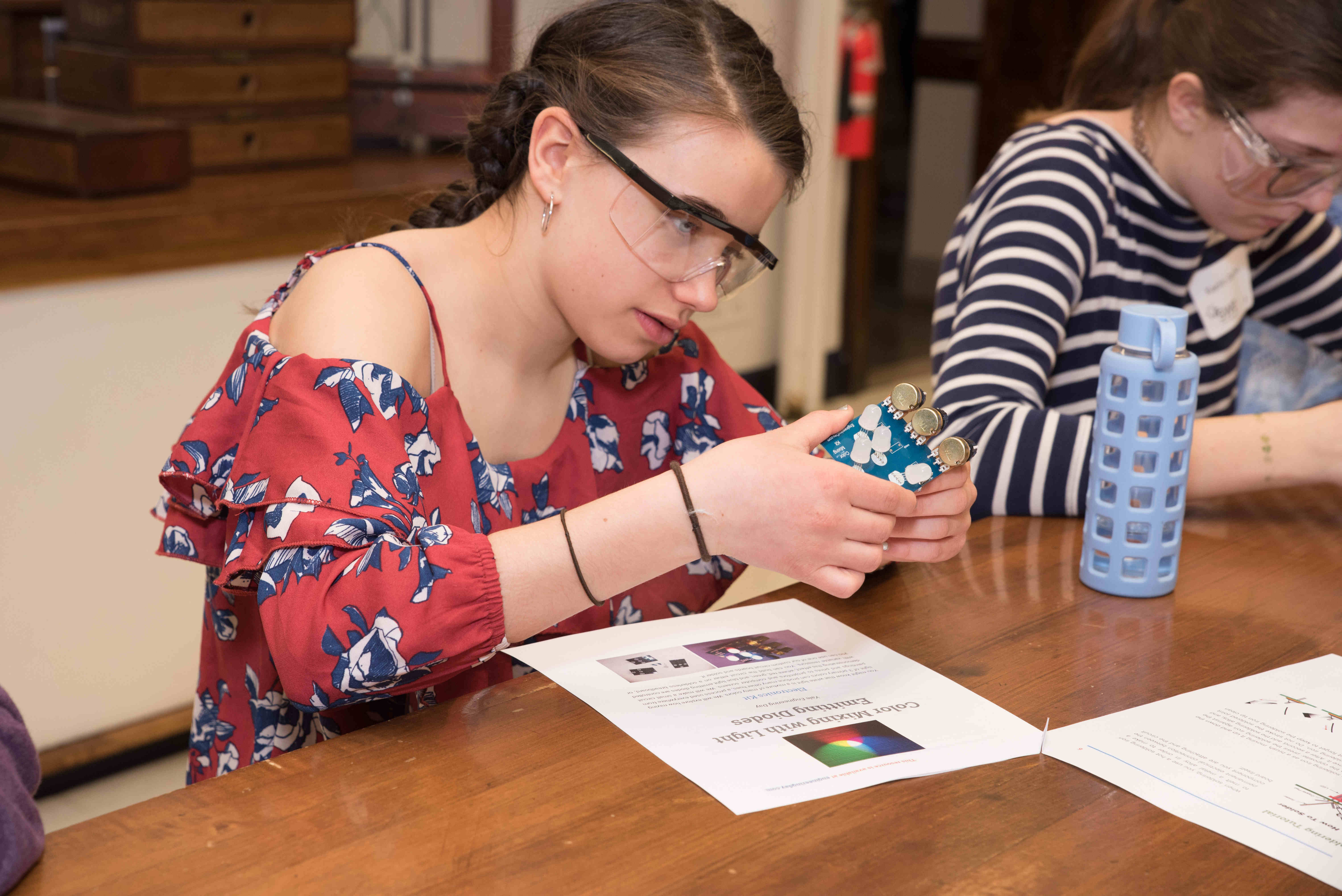 Finally, students learned about many of the ways in which engineering can be inspired by the world around us. Nature has had a few billion years to solve many of the same engineering challenges we have today. In particular, the students were introduced to the notion of hydrophobic and hydrophilic surfaces and how engineers mimic structures seen in kale or lotus leaves to obtain such properties.

The students were also given a second design challenge: building a strong support structure out of weak materials like newspapers (mimicking again the great structural integrity of plants' stems). Many of the resulting structures were capable of carrying quite a few textbooks. 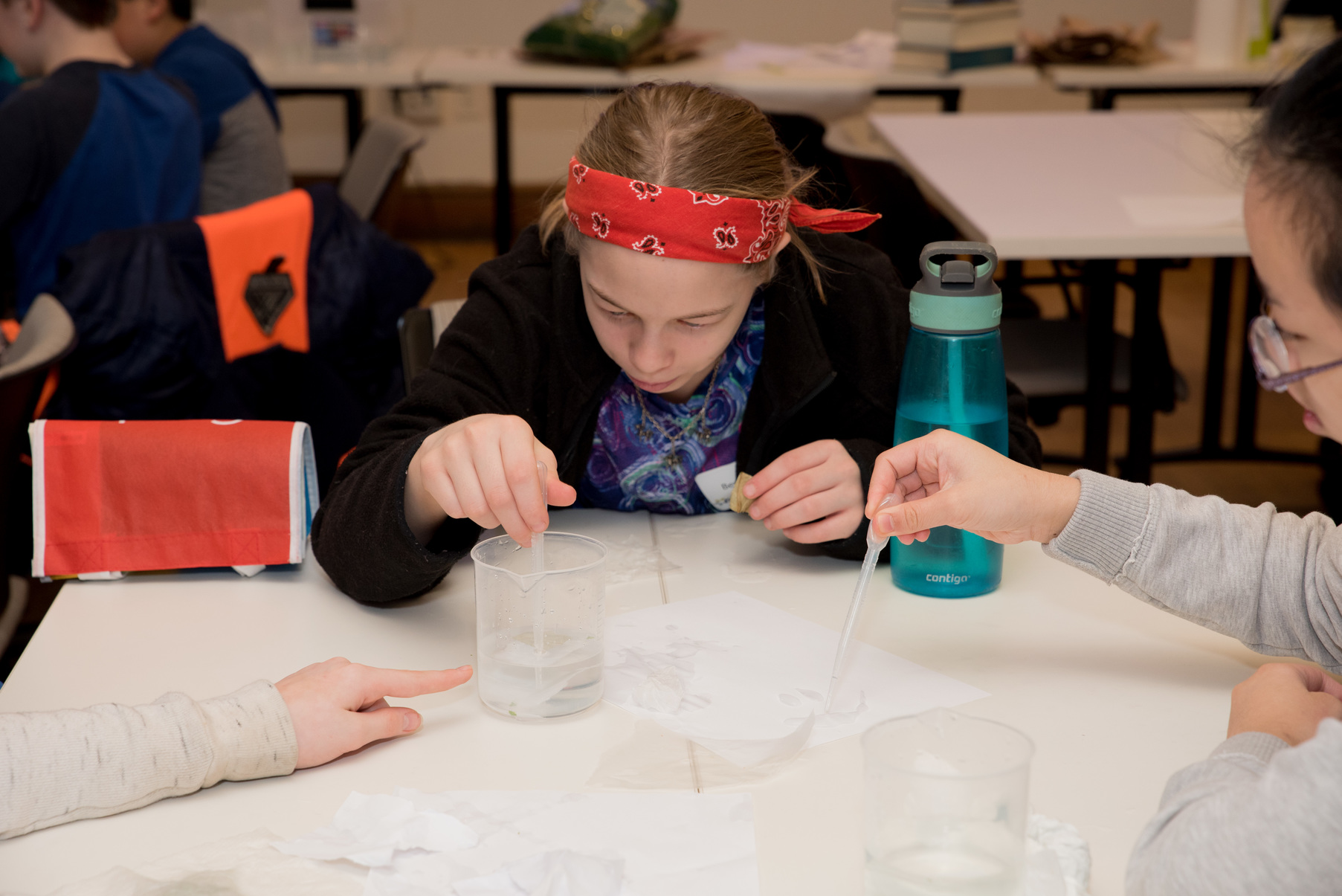 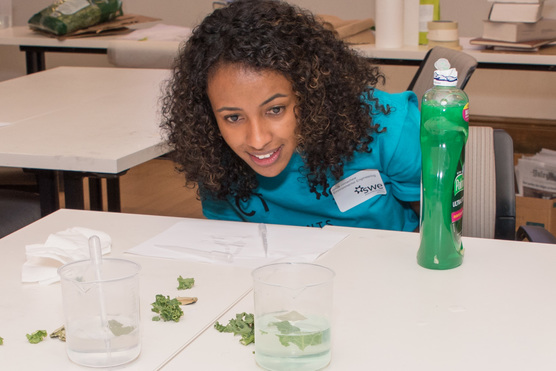 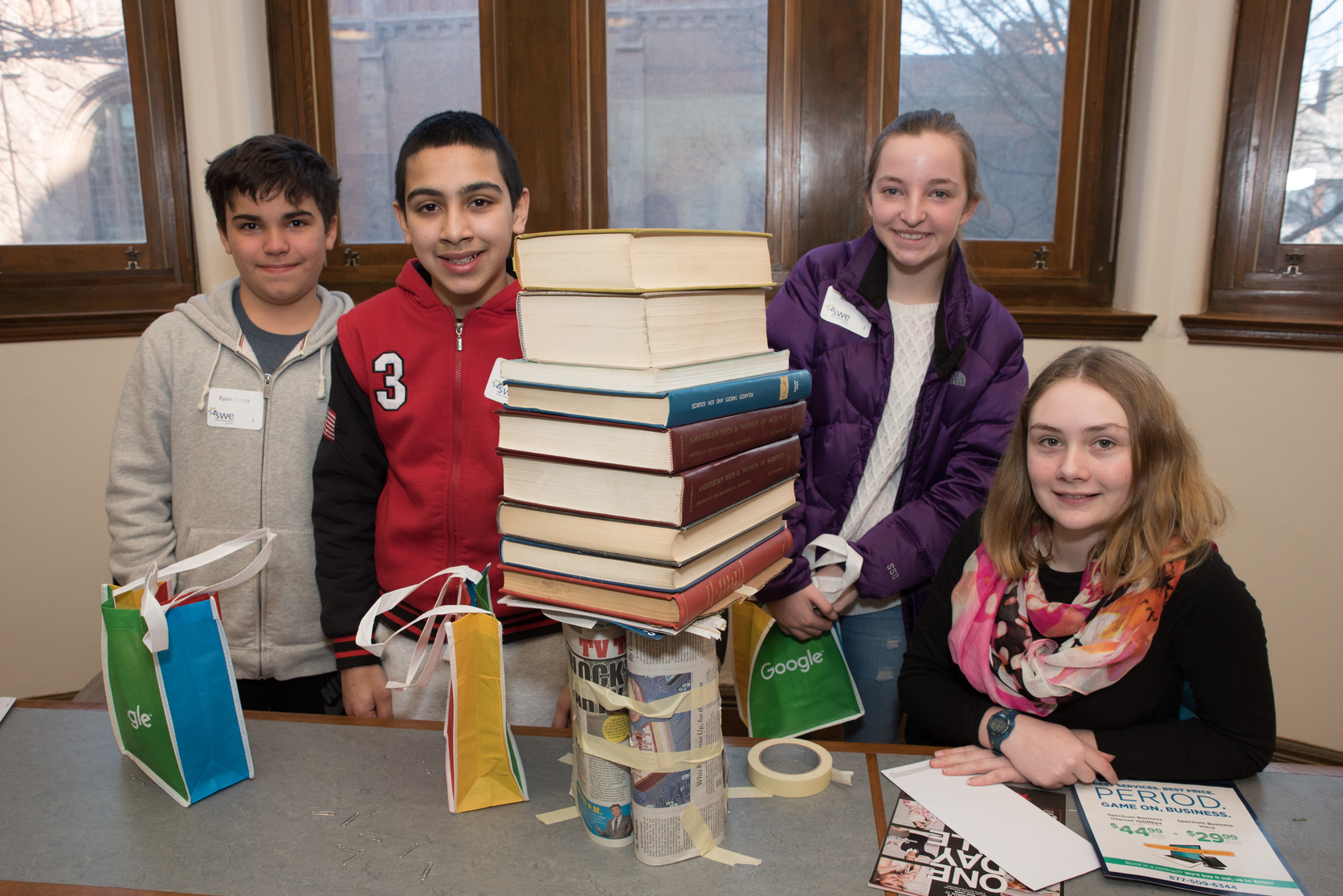 For more details about these activities and others we have run in the past, check out our repository.

Wherever possible, we tried to teach students about the engineering design process, and encouraged them to brainstorm a design, test it out, and figure out how to improve it for an even better next iteration.

At the end of the event, after being treated to a lunch, the students attended an Ask-an-Engineer panel. Our panelists (a mechanical engineering undergraduate with a leadership role in Design for America, a biomedical engineering PhD student involved with SWE who grew up in Connecticut, a member of Engineers without borders, and a biomedical engineer from Medtronic) described their professional and personal journeys. We covered a wide range of topics, from what it’s like to be an engineer, to what it’s like to be a female engineer in a traditionally male-dominated field, to what kind of impact engineers can have on society!

We also held programming for parents and educators throughout the day. The program consisted of a presentation on strategies to engage middle school students in STEM and hands-on demonstrations of the tools we have curated for our own outreach activities. A free guided tour of Yale's campus was made available to the parents and educators as well. At the end of the day the parents and teachers were invited to a panel discussion with engineers and scientist active in STEM outreach as well as outreach coordinators and STEM educators.

The goal for our program was to show parents and educators that STEM can be accessible to everyone, and to introduce them to some of our favorite resources for inspiration and inexpensive supplies.

All in all, the event was a great success! We are grateful for all the middle school students and their parents who participated this year and are looking forward to hosting a 2nd annual CT SEED event next spring. 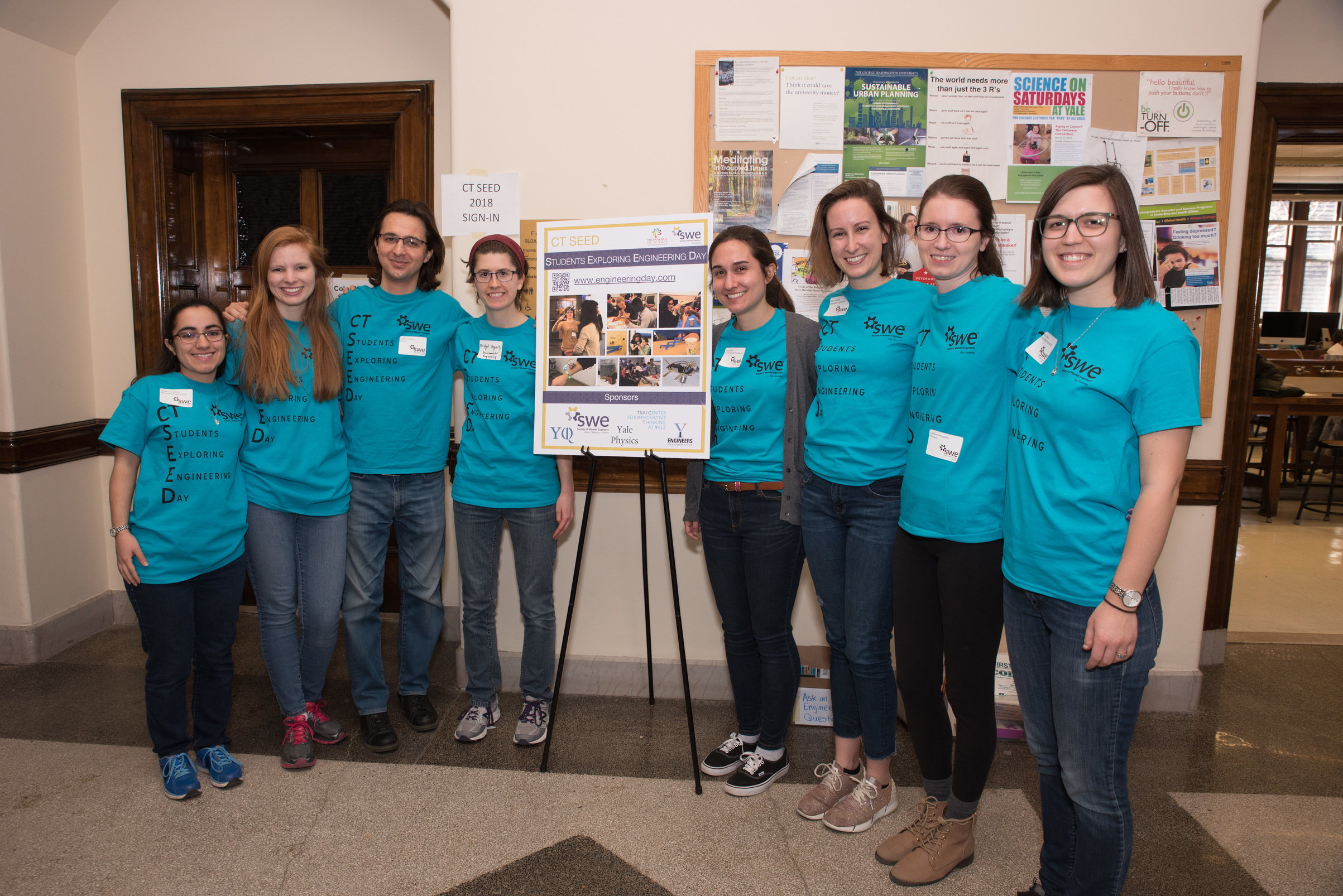